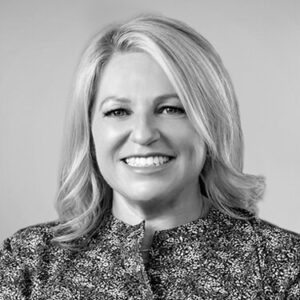 ATLANTA, GA., February 22, 2022— 22Squared, the independent creative & media agency that helps brands add value to consumers’ lives, has promoted its President and Chief Operating Officer Erica Hoholick to CEO. This will be the first time a female has headed the century-old company. Erica succeeds former CEO Richard Ward, who will be focusing solely on driving 22Squared’s parent company, Guided by Good. Her appointment comes on the second anniversary of her hire.

“Erica built a world-class executive leadership team and, as such, it’s the perfect time for her to shift from the day-to-day operations focus of a President, to the long-term strategic focus of a CEO,” said Richard. “In the two years since she came aboard, she has done an incredible job. Her goal now is to chart a path forward to drive phenomenal growth and success, in a culture like no other, with an eye towards doing work that is impossible to ignore.”

Under Erica’s leadership, 22Squared continues charting its own creative course as a fully integrated, super mid-sized agency, while leaning in further to its strategic & creative, multicultural, media, technology and analytics offerings. Erica specifically will focus on driving variety within the client roster and cementing the company’s commitment towards DEI initiatives, internally and with clients. Under her guidance since joining the company, 22Squared’s senior leadership now comprises 62% women, with a third of them being leaders of color from across the country.

“In the next five years, I want 22Squared to be in a category of one.  I want to continue to focus on our diversity efforts, take our fully integrated offering and ensure that each area of expertise is best in class – media, influencer, social, analytics, tech & dev and I want us to do this on a national scale” said Erica. “Geography isn’t a limitation,  the world has opened up to us; we now have 40 employees outside of Georgia and Florida. Half our executive team sits in NYC. We are growing our client base beyond the southeast.”

22squared is an integrated creative company who uses creativity to grow business. We’re 319 brand builders, cultural instigators and do-gooders whose job is to help brands find their conviction and turn it into action for people. And over the last century, we’ve done so for some of the most iconic brands including The AdCouncil, AdventHealth, Amazon Studios, Baskin-Robbins, Columbia Care, CDC, Edelman Financial, LA Pride, McGraw-Hill, NAACP, Publix Super Markets, and Southeast Toyota Distributors. For more information about 22squared, please visit www.22squared.com. You can also follow the agency’s goings-on on Facebook, Instagram and LinkedIn.